N26, the mobile bank, and the NGO ANDES launch the first Re-Cash dispenser to help and support young people and students in distress

This unique donation campaign begins today and will continue until June 19, at the forecourt of Saint-Lazare Station. It will allow the financing of new ANDES solidarity grocery stores across France

Paris - N26, the mobile bank, and the NGO ANDES, France’s solidarity grocery stores association (from SOS Group), are jointly launching their fundraising campaign today, with the introduction of the very first Re-Cash dispenser at the Saint-Lazare Station. The unique concept of the cash dispenser does not allow withdrawing money. Instead, it sends money directly to the ANDES association with the goal of fighting against food insecurity of French students and thus allowing the creation of new solidarity grocery stores across France through the ANDES network.

Currently, the precarious situation of young people is one of the biggest concerns in reopening the country after this challenging year. And for good reason: young people’s situation, whether financial, social or psychological, has deteriorated considerably since the start of the health crisis. Many initiatives have been carried out by both private and public actors, and the surge of solidarity continues to take over France. Even more so, the general public is eager to seize the chance to become an actor of solidarity between generations. The only problem is that the French feel that they do not know how to support the cause. While 59% of French people want to join the initiative of helping young people in difficult situations, 63% of them do not know how to get involved. *

“Young people and students are among the groups most strongly affected by the health and social crisis. Weakened by the lack of social ties and the uncertainties about their future, they also face growing precariousness, often due to the loss of paid activities and it is precisely food expenses that pose the biggest problem to students in crisis. There has been a strong outpour of generosity over the past several months in support of students in difficult situations, and this must continue as social needs have never been so high"- Yann Auger, Managing Director of ANDES

The Re-Cash dispenser: a modern way of engaging the French and boosting fundraising, adapting to new uses 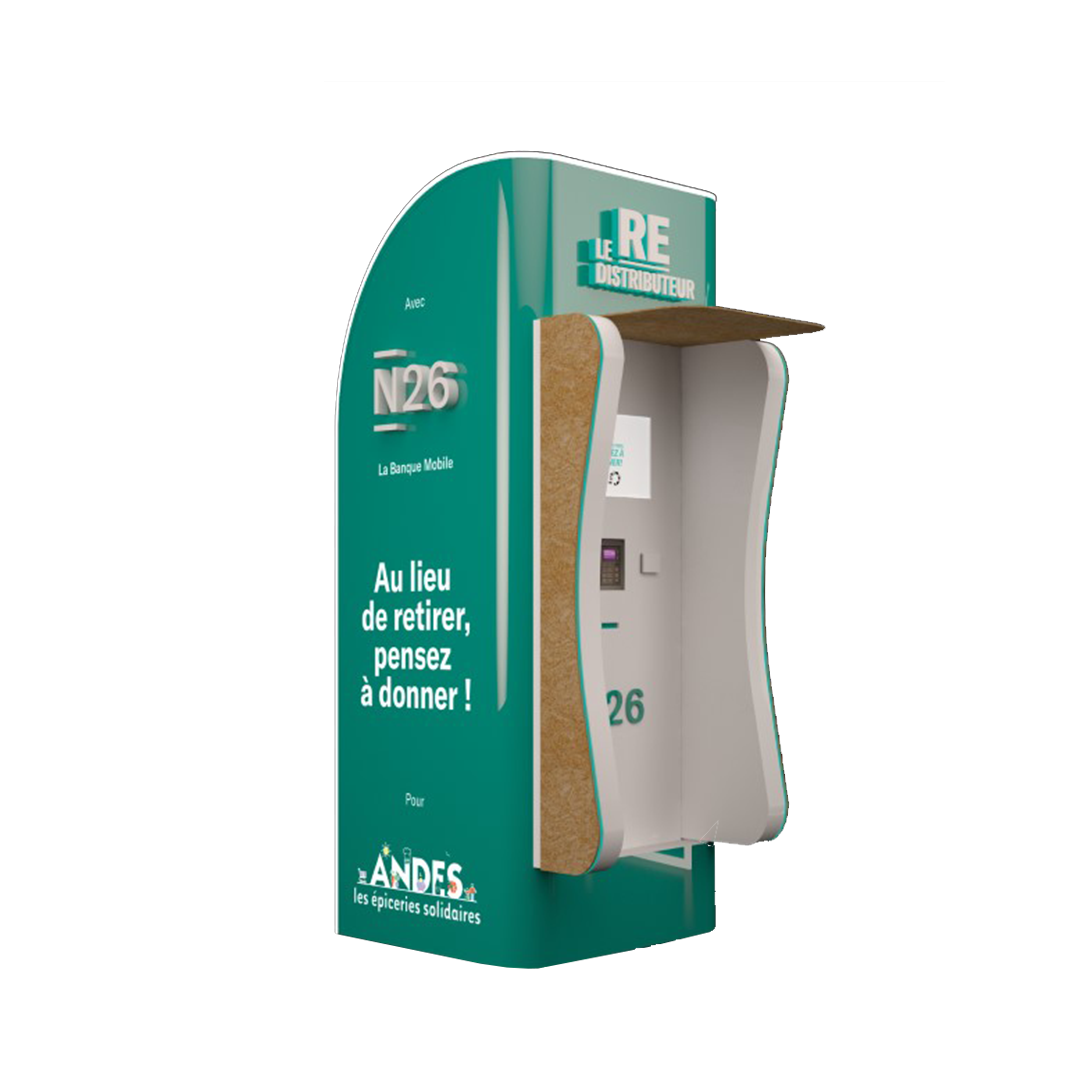 But how do you realize this collective desire for commitment to the cause? Putting their strengths together, N26 and ANDES have developed a new way of reaching the general public and facilitating their engagement. The unusual support campaign was thus born by combining usefulness and originality in the form of a reverse distributor.

From June 17th to 19th, Parisians will find a new kind of vending machine at the forecourt of the Saint-Lazare Station. Instead of withdrawing money, the Re-Cash dispenser is 100% digital and allows everyone - regardless of their bank - to make a donation. This first Re-Cash dispenser will send the collected funds directly to ANDES. Each person making a donation will receive their tax receipt in order to be able to tax their donation. It is the idea of ​​the format that makes this campaign stand out. N26 and ANDES jointly operate a first experience of solidarity, which is above all original, in order to adapt to new use cases and raise funds for the opening of solidarity grocery stores across France. The Re-Cash dispenser acts as the exact opposite of what a traditional bank terminal does and goes against the usual banking missions. Instead, it serves to finance those who really need it. There is no doubt that the public will want to take part in this initiative.

This donation campaign launched in Paris is only the first step in a longer-term partnership, as N26 will extend the initiative on its mobile application. Thus, the 2 million N26 French customers will be able to make a donation directly to the NGO from within the application.

“Inclusion is a choice and a responsibility. It is an honor for N26 France to be able to contribute in the fight against food insecurity among young people alongside ANDES. The younger generation is our future and we know that well at N26. Committing to this initiative only made sense through concrete action, by offering a simple and turnkey solution to help the French to mobilize and support the formidable action of solidarity grocery stores ANDES, which they are implemented on a daily basis in the field”, states Jéremie Rosselli, Managing Director for N26 France & BeNeLux.

On July 9th, ANDES and N26 France will officially announce the results of this donation campaign. In addition, N26 France is committed to donating as many N26 Smart accounts as there have been donations made between June 17th and July 9th. Starting this summer, these accounts will be offered to students for one year, free of charge, through the network of solidarity grocery stores. The accounts will be activated in September.