Worldwide, only 12% of banknotes that depict a person feature females, N26 sheds a light on the inequality of traditional banking by bringing leading women to global banknotes with its AR effect 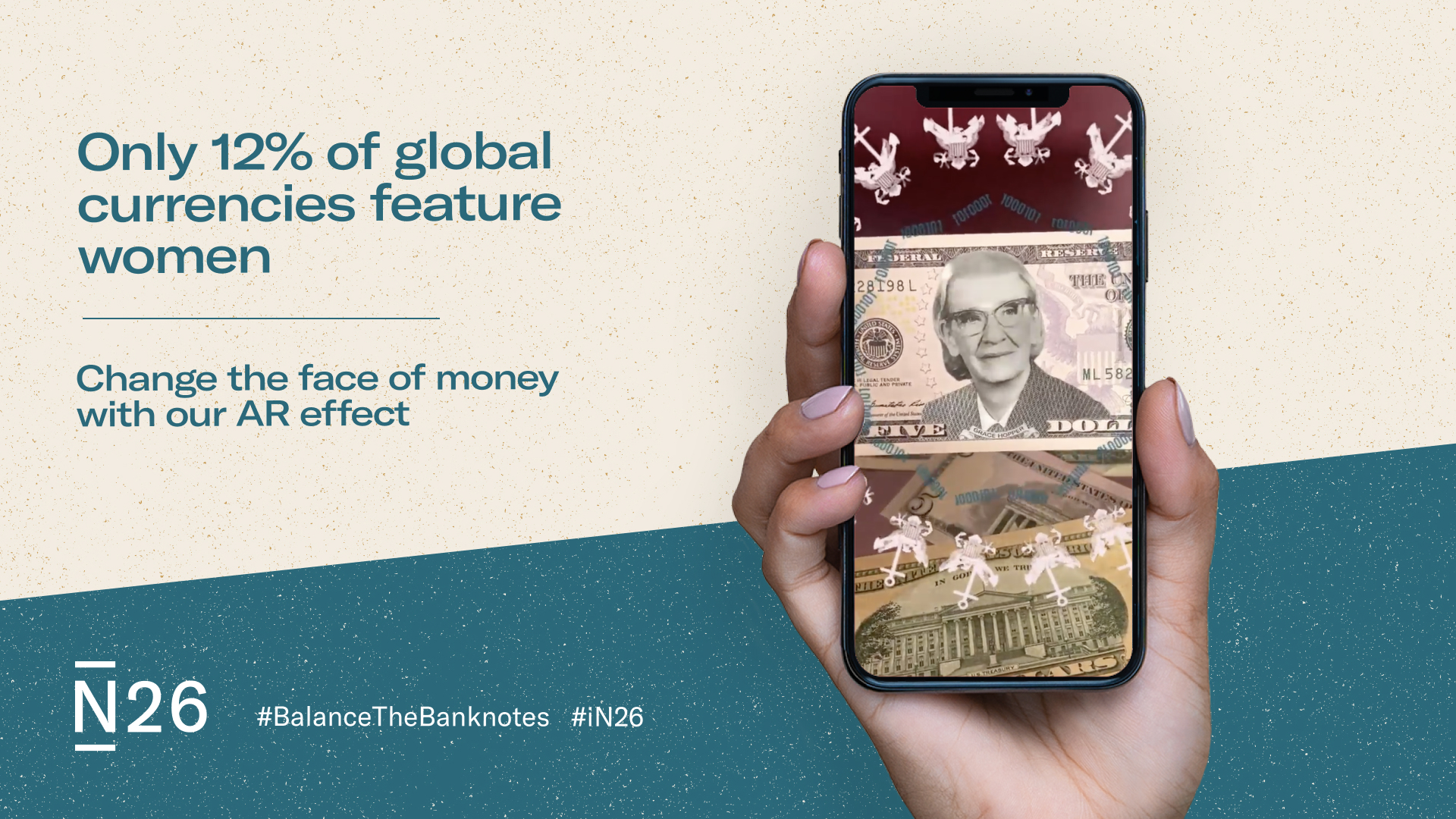 Combatting the historically male-dominated banking institution, the brand-new AR effect is shining a light this International Women’s Day (IWD) on the lack of representation for women that exists in the financial services sector, as part of this year’s #ChoosetoChallenge IWD theme. The initiative gives users an opportunity to raise awareness for the issue and celebrate females of record in the U.S., including Rosa Parks, Grace Hopper and Sojourner Truth on the dollar bill, as well as internationally with Emilia Pardo Bazan and Emmy Noether on the euro.

Despite Queen Elizabeth II’s presence on many Commonwealth banknotes, that’s still only 12% of the world’s paper currency that feature women on them, which highlights the inherent gender disparity present in banking,” said Adrienne Gormley, Chief Operating officer of N26. “We want to do our part in combating inequality wherever we find it, and the AR effect is a great way to call attention to it.”

N26 teamed up with Facebook, along with London-based influencer and creative developer Ommy Akhe of Autonommy, to create the effect using Facebook’s Spark AR platform. To use the effect, users can scan a 1, 5 and 10 dollar bill, as well as 5 and 10 euro banknote with their mobile devices using the Facebook or Instagram camera function, and N26’s AR effect will superimpose the likeness of one of five significant women onto each of the notes, and multiple notes can also be shown in the same frame. If a banknote is not available, users are able to scan digital images to find a suitable substitute. These AR images and videos can be shared to a user’s story or feed to encourage friends and followers to #balancethebanknotes.

In addition, N26 US will be making a donation to the Women for Women International organization to show continued support for the creation of sustainable change for women around the world. The N26 social channels will also make donating to the charity accessible for customers who are interested.

Recently, N26 commissioned a study titled the 'Female Opportunity Index' which explored the disparities that exist between genders in relation to the workplace and additional variables that drive female independence. Key findings from the study reveal that countries like Norway, Finland, and Iceland offer outstanding growth opportunities for women, including access to education and leadership positions in traditionally male-dominated fields. While there is still much work to be done, the results celebrate the countries that encourage female opportunity and where women are thriving in governmental leadership, management, entrepreneurship and more.

To learn more about the #balancethebanknotes initiative and to access directions on how to use the AR effect, check out here.

Axos Bank is a federally-chartered nationwide U.S. savings association that provides consumer and business banking products through its low-cost distribution channels and affinity partners. With approximately $11 billion in assets, Axos Bank provides financing for single and multi-family residential properties, small, medium and large businesses in target sectors, and selected specialty finance receivables. Axos Bank is a wholly-owned subsidiary of Axos Financial, Inc., a financial services holding company listed on the NYSE under the symbol “AX” and a component of the Russell 2000® Index and the S&P SmallCap 600® Index. For more information about Axos Bank, please visit axosbank.com.